The feature which is already available to iOS users, is currently being rolled out web/desktop client. As for Android users beta testers, you will need to wait a little more for the update to be available.

In other news, WhatsApp beta users on iOS can now migrate their chat history from an Android smartphone to an iPhone. This feature has been rolled out to WhatsApp beta for iOS 22.2.74, after it previously spotted the reverse capability in the WhatsApp beta for Android. 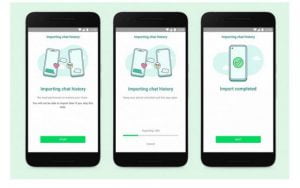 Chat migrations between the two smartphone operating systems are only possible for those users who wish to switch from iOS to a new Samsung Android smartphone or a Pixel 6. But WhatsApp has promised to make it available to all Android and iOS users in the “coming months”.

Google also promised that the feature is being rolled out to all Android 12 smartphones.