The Vivo V23e is expected to be launched at some point this month. After we saw a hands-on video of the phone that appeared earlier this month, the device has now officially been listed on the Vivo Vietnam’s website. The listing confirmed the image of the phone and how it is going to look like, but no official specs were reviewed. Aside the image of the phone, the listing only revealed the phone sporting a stellar cameras and an ultra-slim design.

At the time the Vivo V23e was listed on the Vivo official website, tipster Sudhanshu Ambhore also shared a leaked information from a retailer listing of the smartphone. From the details, the Vivo V23e is expected to feature a 6.44-inch AMOLED display with a Full HD+ resolution. The front will house an autofocus-enabled 50-megapixel front-facing camera with an f/2.0 aperture. On the back, is a combination of a 64-megapixel primary camera with f/1.79 aperture, an 8-megapixel ultrawide lens, and a 2-megapixel macro camera. It has a body dimension of 160.87 x 74.28 x 7.36 / 7.41mm and weighs 172 grams. 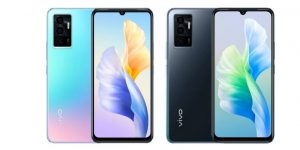 The phone is expected to be powered by the MediaTek Helio G96 chipset and paired with 8GB of RAM. It will come with 128GB of storage that can be expanded using a memory card. It is expected to run on FunTouch OS 12 based Android 11 and pack a 4500mAh battery that will supports 44W fast charging.

Other features include supporting dual SIM, Wi-Fi 5, Bluetooth 5.2, USB-C, GPS, and an In-screen fingerprint scanner. The Vivo V32e is expected to launch in two colors that include Moonlight Dance and Dawn Melodies.