Smartphone maker, Samsung is expected to announce the Galaxy S22 series come February. One among the series, is the Galaxy S22+. This was recently spotted at Geekbench along with some specs. The Galaxy S22+ appeared with the model number SM-S906U.

It comes sporting a Qualcomm chipset and equipped with four CPU cores working at 1.79GHz, three CPU cores clocking at 2.50GHz, and one CPU core ticking at 3.00GHz. Other details show the device running on Android 12 operating system and paired with 8GB of RAM. 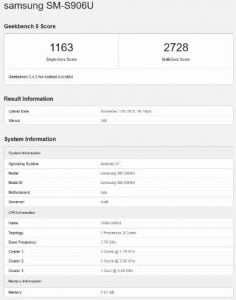 The phone scored 1163 and 2728 points in the single and multiple core test respectively. This same phone was spotted on Geekbench with the upcoming Exynos 2200 chipset. A recent leak suggests that it will be coming with the Snapdragon 898 mobile platform in the US, Asia, and Africa.

More details will be made available in the coming days. Above is the image render of the Samsung Galaxy S22 Plus by the team of 91mobiles/OnLeaks.