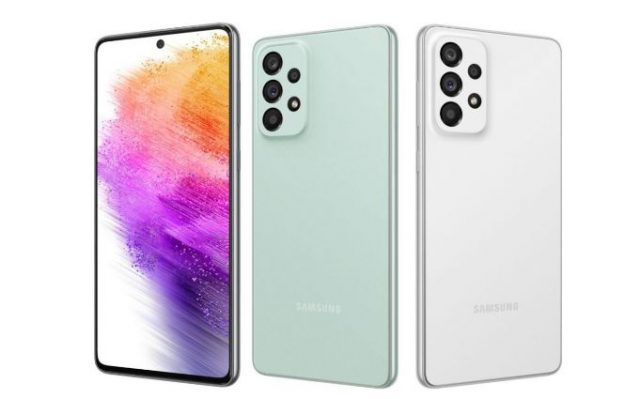 After the Galaxy A72 was unveiled last year, Samsung has now unveiled a successor to the device. Known as the Galaxy A73, the phone was announced alongside the Galaxy A53 5G and Galaxy A33 5G via an online event. As per the specs, the Galaxy A73 comes featuring a 6.7-inch FHD+Super AMOLED Infinity-O Display, with a screen resolution of 1080×2400 pixels. It comes with 120Hz refresh rate and has Corning Gorilla Glass 5 protection.

The phone is powered by an Octa Core Snapdragon 778G processor, supported with Adreno 642L GPU. This is paired with up to 8GB of RAM and supports up to 256GB of internal storage. The storage can further be expanded up to 1TB using a memory card. The Galaxy A73 runs on Android 12 with Samsung One UI 4.1 and packs a 5000mAh battery with 25W fast charging.

It has a body dimension that measures 163.7×76.1×7.6mm and it weighs 181 grams. The is IP67 water and dust resistance and it supports Samsung Pay, as well as features USB Type-C audio, Stereo speakers with sound by AKG and Dolby Atmos.

As for the cameras, the Galaxy A53 5G sports a 108MP main rear camera that support an f/1.8 aperture. This is combine with a 12MP ultra-wide angle camera that supports an f/2.2 aperture, a 5MP depth sensor and 5MP macro camera with f/2.4 aperture along with an LED flash. On the front of the device, is a 32MP front facing camera with f/2.2 aperture. For the connectivity, the phone supports 5G network, 4G network, WiFi, Bluetooth, GPS + GLONASS, USB Type-C and NFC.

The Samsung Galaxy A73 5G comes in Gray, White and Mint colour options. It is expected to be rolled globally starting from April 22nd, along with the price details.