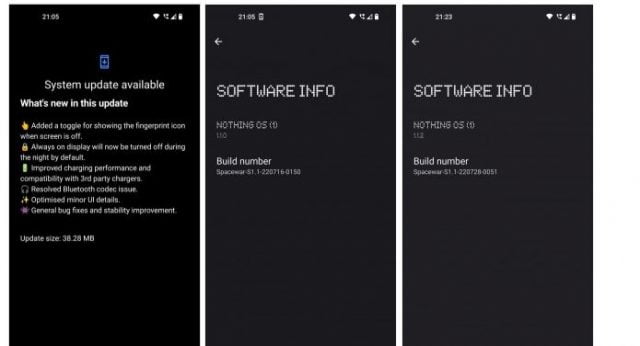 Nothing is rolling out version 1.1.2 for the Nothing OS (1) to the Phone (1). The update comes with UI and charging improvements as well as bug fixes.

With the new update, the always-on display feature will now have the custom schedule on by default. While this feature can manually be changed at any time, the new update makes the feature automatically turn itself off at night. The update also comes with an option to make the fingerprint icon appear when the display is switched off and you move the phone slightly. However, for whatever reason, this option does absolutely nothing on our review unit. The fingerprint sensor itself does seem a bit faster after the update.

Other features according to the update includes improved charging performance and compatibility with 3rd party chargers, fix to Bluetooth codec issue, as well as optimized minor UI details and introduced general bug fixes and stability improvements.

While the update is being rolled out to fix these issues, other users have complained about audio quality and face unlock issues.