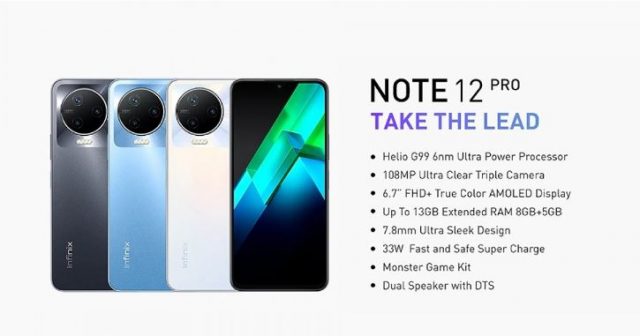 Infinix has once again added a new member to its Note 12 series, with the introduction of the new Infinix Note 12 Pro 4G. This is coming after the company revealed that it will be unveiling the world’s first MediaTek Helio G99 phone. The new device was recently listed in Aliexpress with some detailed specs.

As for the difference, the 4G model seems to be slightly thinner at 7.8mm. Other differences features include NFC, two nano SIM slots and a microSD one, as well as a USB Type-C port and a 3.5mm audio jack. The biggest difference, of course, is the chipset swap to a MediaTek Helio G99. It is made on TSMC’s 6nm node and features two 2.2GHz Cortex-A76 cores and six 2.0GHz Cortex-A55 ones, plus a Mali-G57 MC2 GPU. Here it is paired with 8GB of RAM (expandable to 13GB via virtual RAM) and 256GB of expandable storage.

According to the listing, the Infinix Note 12 Pro 4G comes in grey, blue and white colours. The phone is available for purchase at a price tag of $275.88 currently. The Price may go down when the phone is officially launched.